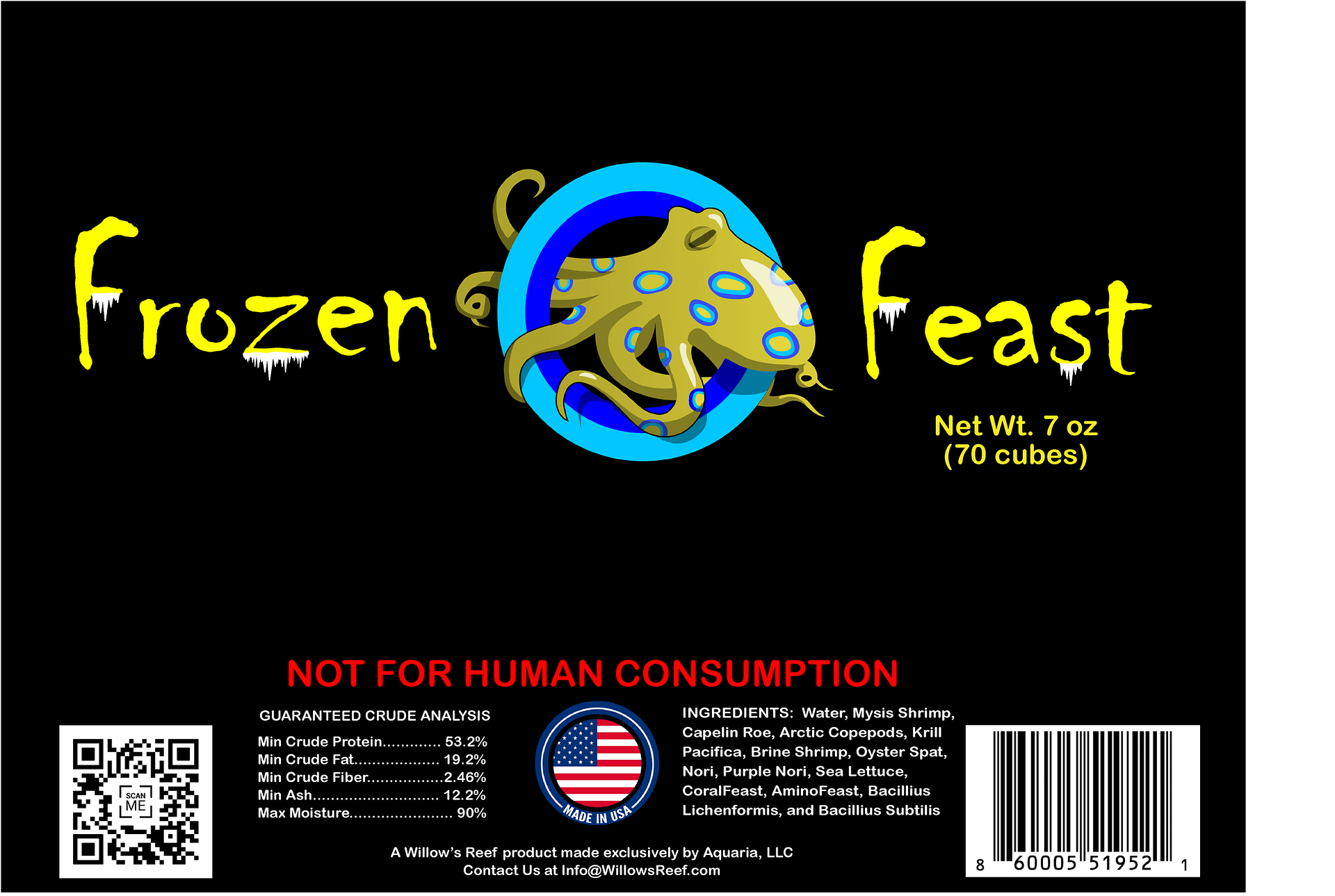 FrozenFeast is an aquarium food and can also be found in select retail stores. Each retail pack will contain 70 cubes made for easy feeding. FrozenFeast contains a balanced mix of mysis, brine, krill, fish, oyster eggs, and seaweed, along with two special types of bacteria - containing the added benefits of both AminoFeast+ and CoralFeast.

We are now taking wholesale orders for our all-new FrozenFeast aquarium food. Please ask your LFS to reach out to us or email us at info@willowsreef.com. You can always let us know the shops you visit frequently, and we can reach out to them directly.

FrozenFeast comes in a heat-sealed freezer bag so that it lasts longer in your freezer. Ideal for nanos and mixed reef tanks.

FrozenFeast aquarium food contains both shelf-stable natural bacterium B. subtilis and B. lichenformis. These bacterias are used in conjunction because they germinate under slightly different conditions, e.g., salinity and temperature, giving the user a better range of rearing environments when using the product.

Both bacillus species are used to reduce metabolites, primarily NH4 and H2S. Putative benefits include reduced water exchange, lower levels of blue-green algae, lower ammonia levels, less stress on animals, resulting in less disease. This is a live probiotic. The bacteria in this product are cultured in a specific manner that makes them adapted to colonizing the animal gut. Their express purpose is to provide nutritional and immunological benefits to the fish, corals, and other animals that consume them. Other products on the market claim to contain probiotic bacteria, but those are dry (inactive) cultures of sketchy genera such as Lactobacillus and are used because it is cheap.

These bacteria (Rhodopseudomonas) are live, viable, and are proven to increase feed conversion in captive fish. It is also a widely known coral-associated probiotic. We spend a lot more time and money to culture these on a polyphenolic food source, which essentially means that they are adapted to breaking down recalcitrant organic substances like cellulose. Hence, herbivores like tangs ultimately digest more of their food and generate less solid waste. Throw in the fact that these bacteria are also rich in carotenoids. There really isn't even a comparison to the very few other true aquacultural probiotic products available in our industry.

Have any questions or suggestions? Please reach out! We love to hear from our fellow aquarium hobbyists.